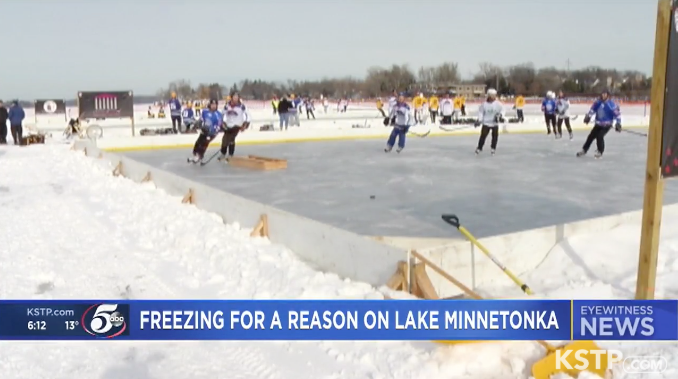 Skaters from more than 90 pond hockey teams will be sharpening their skates this week ahead of the North American Pond Hockey Championship.

The tournament this upcoming weekend will be the championship’s eighth on Lake Minnetonka, and it has raised more than $1.3 million for charities since 2014.

Crews were working through single-digit temperatures with subzero wind chills Saturday to get more than a dozen hockey rinks ready.

“The cold doesn’t deter at all,” said Tim Jenzer, who’s known as the “Ice Boss.”

“Hockey players love the cold. It means they have good, hard ice and aren’t skating on slush and puddles,” he added with a smile.

The tournament is hosted on Lake Minnetonka, with all the festivities taking place behind Maynards.

Each year, organizers pick a charity to benefit from its proceeds. This year, the #GIVE16 campaign was chosen. Founded by the Minnesota Wild’s Jason Zucker and wife Carly, it works closely with the University of Minnesota Masonic Children’s Hospital.

Tournament co-owner Steve Youngstedt said he bought it after the sudden passing of his friend, who once was in charge, and has been blown away by the generosity from the start.

“We call it hockey with a heart,” Youngstedt said. “Everybody out here is a volunteer. It’s just amazing how many people come out and participate, and I think everybody gets something out of it.”

On top of hockey, there will be a bean bag tournament, live music and more. Saturday night’s concert’s proceeds will benefit the local ALS Association.